您的足迹: • Dragons, Serpents, and Slayers in the Classical and Early Christian Worlds: A Sourcebook
books:dragons_serpents_and_slayers_in_the_classical_and_early_christian_worlds

Dragons, Serpents, and Slayers in the Classical and Early Christian Worlds: A Sourcebook 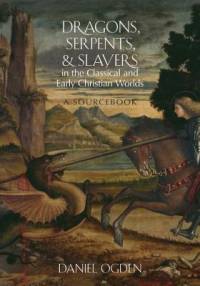 Stories about dragons, serpents, and their slayers make up a rich and varied tradition within ancient mythology and folklore. In this sourcebook, Daniel Ogden presents a comprehensive and easily accessible collection of dragon myths from Greek, Roman, and early Christian sources. Some of the dragons featured are well known: the Hydra, slain by Heracles; the Dragon of Colchis, the guardian of the golden fleece overcome by Jason and Medea; and the great sea-serpent from which Perseus rescues Andromeda. But the less well known dragons are often equally enthralling, like the Dragon of Thespiae, which Menestratus slays by feeding himself to it in armor covered in fish-hooks, or the lamias of Libya, who entice young men into their striking-range by wiggling their tails, shaped like beautiful women, at them. The texts are arranged in such a way as to allow readers to witness the continuity of and evolution in dragon stories between the Classical and Christian worlds, and to understand the genesis of saintly dragon-slaying stories of the sort now characteristically associated with St George, whose earliest dragon-fight concludes the volume. All texts, a considerable number of which have not previously been available in English, are offered in new translations and accompanied by lucid commentaries that place the source-passages into their mythical, folkloric, literary, and cultural contexts. A sampling of the ancient iconography of dragons and an appendix on dragon slaying myths from the ancient Near East and India, particularly those with a bearing upon the Greco-Roman material, are also included. This volume promises to be the most authoritative sourcebook on this perennially fascinating and influential body of ancient myth.