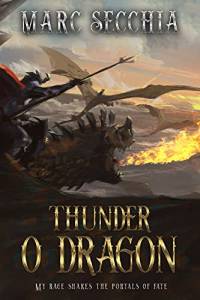 Thunder o Dragon. My rage shakes the portals of fate!

From flying to war to becoming a living playground for thirty children, a Dragon called Dragon is growing in all sorts of unexpected ways these days.

Never mind. With his signature wit and inimitable style, and the expedient of occasionally throwing his beautiful black Princess, Dragon Rider and best friend straight at his troubles, this Dragon is prepared to seize his war-torn world by the scruff of the neck and shake it into shape. It's not as if the world has a choice in the matter.

The third hilarious, climactic volume in Dragon Fires Rising sees an unlikely Dragon-Rider team take on the full might of the invading Skartunese army.